After a recent trip to Memphis, Tennessee and touring Graceland, many memories of growing up with a major crush on Elvis popped up.  Before I share about our actual trip, I had to set up how serious my crush was.  Here we go…..

I was six years old when I first noticed Elvis Presley. I was sitting in the back seat of my parents car at the drive-in movie. I usually would fall asleep at movies and I’m sure I did this time, but not soon enough to notice how handsome he was on the big screen. 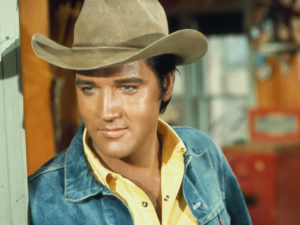 Elvis Presley made such an impression on me at such a young age that he broke my heart when I was 8 years old. I was outside playing dress-up in my mom’s red and white checked dress and her black high heels. I had spread out a newspaper on the ground pretending it was carpet. Someone please tell me I’m not the only one that did such a thing!  I was pretend cooking on my dad’s grill!  (Who needs a play kitchen set?)  As I was standing at my pretend stove “cooking,” I happened to look down at my newspaper floor. I noticed a picture of Elvis. I grabbed up the paper and began reading. It was Elvis’ wedding announcement. This was the famous picture of Elvis and his new wife, Priscilla, cutting their cake.  Tears welled up in my eyes. I then ran into the house calling for my mom. She asked me what was wrong and through tears and much sadness I showed her the picture in the newspaper and said, “He was supposed to wait for me!”  I was so distraught, my playtime was then over.   My life was over at the tender age of 8 years old. I don’t remember much after that, but I do remember being sincerely heart broken. Somehow, someway, I managed to carry on with life. 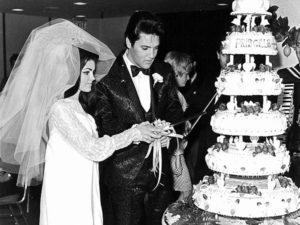 Whenever an Elvis movie was on, I would be so excited and would watch intently. I had several of his albums and 45’s. Matter of fact, when I was 12, I asked for the new, “Live At Madison Square Garden” album for Christmas. One afternoon as I passed our Christmas tree, I saw a square wrapped gift.  It was thin just like an album.  With my closer inspection and by pressing the paper down, I could see that I was going to get the album that I had dreamed of.  I had never peeked into gifts before and on this particular day, something came over me. I was home alone while my mother was at work when my eyes landed on the gift. I don’t remember how I justified of doing such a thing.  Before I knew it, I had opened very carefully the album, took it out and played it all afternoon. When I was finished, I put it back and taped it carefully back in place. I know, terrible, right? I’m so ashamed to admit this, but it is what it is. I was a criminal. The guilt must have not been that bad, because I listened to it one more time before I did the final opening on Christmas Eve.  I eventually confessed to my mother what I had done.  Now that I think about it, I think my brother confessed for me. 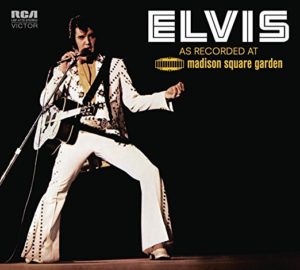 A couple of years later, Elvis did his famous concert in Hawaii. We went to my aunt’s house and my mom and I watched it with her. My mom and aunt were squealing, singing and dancing the entire time. I had as much fun watching them as I did watching Elvis. 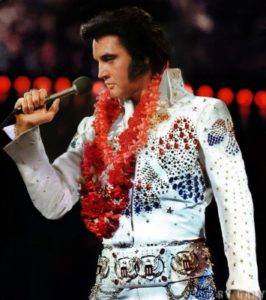 One evening when I was 14, I was very excited because an Elvis movie was coming on and I had everything set for the big event. When my mother came home from work, I told her about the movie. She then informed me that we were going to watch something else. She had heard of a preacher named Billy Graham that she wanted to listen to and he had a special on that very night at the same time as my Elvis movie. I was crushed. I thought the world had ended. I cried and sulked like only a 14 year old can. As I was watching the Billy Graham special, I heard about how God sent His one and only Son to die on the cross for my sin and all I had to do was ask Him to  forgive me of my sin and believe on Him and  I would have a home in Heaven someday. Billy Graham gave an invitation where people could go forward and ask Christ into their lives. I wanted that.  I wanted Christ in my life.  I believed.  I slipped into my bedroom and knelt by my bed and asked Christ into my heart. I’m almost certain I asked for forgiveness for breaking into my Christmas present those years before and so much more that I needed forgiveness for.  I wanted a Heavenly Father in my life and how thankful I am that Billy Graham won over my Elvis movie that night. After that night,  I was a new creation in Christ from that moment on and the life change that took place in my life and world leaves me speechless.  (My story was published in Billy Graham’s magazine, Decision, in the September 2010 issue.)  I still had a crush on Elvis, but in a different way. 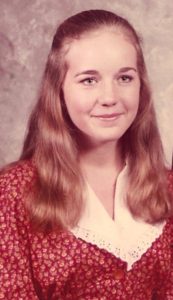 Elvis was actually coming to our city when I was a Senior in High School.  The concert was also on a church night. I never missed church for anything. It was a big decision for me to go to the Elvis concert. When I told my youth pastor that I wouldn’t be at church that night because I was going to see Elvis, I felt really guilty. But, my guilt quickly disappeared as I got all settled in my seat. I still remember the thrill of seeing him walk out on stage to the flashes of cameras.  There were so many flashes, it was hard to see him, not to mention my best friend and I were in the nosebleed section of the coliseum.  It was such a surreal moment. This was in 1976, so he was not in the best of shape, but I didn’t care. He still sounded wonderful and just the fact that I got to finally see him was so exciting.

My heart hurt when I heard that he passed away the next year. I was sad for how his life had ended up. I’ve always joked that if he would have waited for me, he would be happy, healthy and alive today. He would also be 80 years old; a bit young for me, but whose counting?

I don’t think I mentioned that when I was around 16 or 17, I was at a youth conference and the speaker spoke on the subject of music. The main topic was on the topic of  only listening to music that glorifies God.  This  speaker also talked about how we should go home and break all of our records that didn’t honor God. Yes… I did it! All of my Elvis, Donny Osmond and Carpenter albums were broken and thrown away. Can we have a moment of silence please!  This was a big step for me. Sounds crazy, but it was okay. I really didn’t miss them because I got really busy with life and music just wasn’t a part of my life like it was before.

I’m still an Elvis fan, but not the crazy screaming crying kind.  I enjoy listening to his music and watching his concerts.  The movies are a bit interesting and as a child you don’t notice some of the content or the cheesiness as you do as an adult.

After touring Graceland a couple of weeks ago, it brought up so many memories of my Elvis crush while I was growing up.  Tomorrow, I will share about our trip.  My husband and I stayed at the brand new Guest House at Graceland.  It was beautiful and I can’t wait to share it with you.  We spent 4 days in Memphis and I look forward to going back someday.

By the way, if you don’t want to miss a post, be sure to subscribe to my blog and you will receive my updates in your inbox.  The link is on the sidebar to your right at the top.  I look forward to having you as a subscriber.