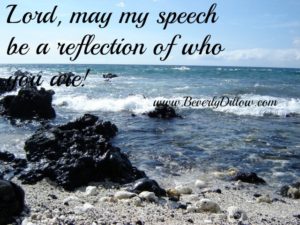 While listening to a recent news cast report on an episode that involved Gov. Sarah Palin’s daughter, Bristol, I was struck by the language that was obviously being used. Fortunately, the television station used the famous bleep sound so we wouldn’t hear her choice of words in describing her awful incident.  I honestly don’t think that there was one sentence that didn’t have a bleep.

Having bleeps in recorded videos and interviews are pretty common while watching the news and other shows with interviews.  Even the weather channel has to use their bleep sound as people are recording various weather issues going on.  As a tornado or strong wind is blowing, you can hear the person recording describing what he is seeing and most of the words are bleeped.

Sometimes the newscast will actually type out the conversations and have symbols in place of the bleep.  I find myself reading it and wondering what the word is they are using.  Sometimes, I can’t figure it out and many times, it is obvious what words they are using.

Today, movies, television and all sorts of reading material are filled with language that could curl our toes, as my mom used to say.

I listened to a preacher last summer that used a certain word while talking to the teens before they boarded the bus for summer camp.  I wondered if he was just trying to be cool among the teens and worked hard at inserting this particular word that he said more than once or was that just the way he talked and didn’t see any harm in it.

As Christ followers, I would think that our language would be the first thing that would give us away in being different and set apart from the world.

After hearing the crazy audio of the Palin incident, I wondered what would happen if a tragedy happened to me and I was being recorded. Would 4 letter words roll off my tongue like you hear on the nightly newscasts.  What about you?  Would we hear bleeps while we listened to you?

What about using God’s name in vain?  His name is thrown around and stepped on as if it were a piece of garbage.  We may not use God’s name in that way, but we pay money to hear it thrown around in movies and may not even flinch at hearing His name drug through the gutter.

When the Home and Garden Channel first began, I was so excited about seeing all the decorating shows, but it quickly got old as every time someone came into their newly decorated space, you would hear,  “Oh my God!”  over and over and over…..even children would say it.  Can we not think of anything else to say?  Are we that limited in our language skills?

May we teach our children to speak good things, even when something goes wrong.  We can express disappointment, fear and excitement with better language than what we hear daily in the media and when we are out in the community.

We can always go to God’s Word and find teaching to help us grow stronger in this area of our language:

“…shun profane and idle babblings, for they will increase to more ungodliness.” -2 Timothy 2:16 NKJV *we have to make a concentrated effort to speak in a godly manner.

“…that you put off, concerning your former conduct, the old man which grows corrupt according to the deceitful lusts, and be renewed in the spirit of your mind, and that you put on the new man which was created according to God, in true righteousness and holiness.” -Ephesians 4:22-24 NKJV *is there something different about us than the way we were before we became a Christian?

“But those things which proceed out of the mouth come from the heart, and they defile a man.” -Matthew 15:18 NKJV *whatever is in your heart, will come out.  We must search our hearts daily.

“Let no corrupt word proceed out of your mouth, but what is good for necessary edification, that it may impart grace to the hearers.” -Ephesians 4:29 *Speak edifying words, not corrupt words.

If there are any bleeps hidden in your heart, there is one place you can take them and that is to the Cross.  Jesus doesn’t want us to be known for our bleeps; our purpose is so much greater than that!