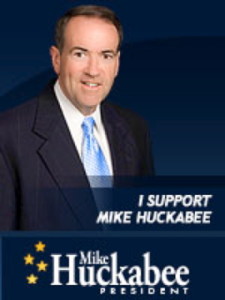 Last Tuesday was the day I got to finally vote for Mike Huckabee. Yes, I’ve heard all the talk about how he didn’t have a chance and we need to vote for McCain. Well, I wanted Huckabee as my President, so that is who I voted for. I was becoming more and more weary of the media, even FOX News leaving Huckabee out of the loop. The only time you heard about him was when they would get an interview with him and all they knew to ask was “When are you going to drop out of the race?” and “Why are you still in the race?”

I really don’t understand our system of the media telling us who our candidate is and who isn’t and then if you vote for who you want, you are told how that is only hurting the other guy. I thought that was what Primaries were for. Maybe I’m confused on our voting system, I don’t know.

Huckabee told us that if McCain got the amount of delegates needed first, then he would drop out. Huckabee kept his word and did so.

I heard Huckabee speak a little over 10 years ago and even then I thought he would be a good choice for President. I was a little disappointed by the Christians who didn’t back him. He was strong on all the moral issues that we face as a country today. The negative things I heard were attacks on his character as a Christian. I think out of the whole deal, that is what I was most disappointed about, when it came time to vote for a godly man as our President, people were still finding faults. No, he isn’t perfect as I’m not perfect.

Thank you Mike Huckabee for your stand and for giving me the opportunity to vote for you.

Now, back to reality. I will be praying for our country as the next President is elected. I still believe God is in control of all things. I am so thankful to live in this free country. I pray that it will remain that way and that the Christians will speak up and let their voices be heard and not let petty differences stand in the way.

Our duty is to do our research, know what the real issues are and be smart. Don’t let the media tell you who is and who isn’t worthy, that includes Rush Limbaugh and Fox News. Listen to what they say, but do your own research. Remember, there is wisdom in a multitude of counselors. Don’t base everything on one person.

I’m through being political for now. 🙂

Have a blessed day!