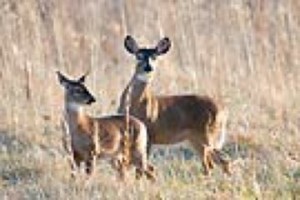 This past weekend we traveled to Stephenville, Texas for a wedding. We then drove to our Lake House in Brownwood for a day of fun on the lake. We headed home a little late and drove home on the backroads which are mostly two lane roads that go through several small towns. I was hesitant and wanted to go the interstate way, but we thought this way would be easier. I followed my husband and Patti and Rodrick followed me. April wanted to ride with her Papa and Oliver stayed with his mommy and daddy. I was by myself. As we drove, I started thinking that maybe deer might be crossing the road, so I was a little paranoid and kept my eyes moving from side to side watching for deer. I was listening to my cd’s. When a cd changed to the next one, I looked down and was trying to decide if I wanted to skip to the next cd or not. I then looked up and a deer was standing sideways in the middle of the highway. I was going about 67 miles per hour. He just stood there staring at me and I held on to my steering wheel as tight as I could and barely touched the brakes. I turned my wheel barely to the right because I thought maybe he would run to the left. I don’t think he ever moved! All I remember is slamming right into him. It was so loud and all I saw were legs and his head going down and his little hooves. I really thought he was torn apart by the way the legs were flying around everywhere. I was so shocked, I immediately pulled over and Rodrick pulled up behind me and Patti called Jim on the cell phone to tell him what had happened. Rodrick asked me if I was o.k. and I said, “I think so.” I asked if the deer was all over the place and he said all they saw was the deer fly over in the road and his legs were kicking. I was shocked he was in one piece. Rodrick checked the front of the car and said “I think it is alright.” We then took off again and I drove very slow until we met up with Jim at the next town. I cried all the way there. I felt so bad for that poor deer. I was so amazed my airbag didn’t go off and then I got mad that the deer just stood there. I kept saying over and over, “I knew I was going to hit a deer!” When we pulled up into a parking lot, Jim got out of his truck and was looking at the front of my car. He looked shocked. I thought, “Oh no, there are deer legs stuck in my car.” I was scared to get out. Jim told me there weren’t any deer parts anywhere and that it was safe to look. My car was destroyed. Jim drove my car on home and I drove his truck. He wasn’t sure my car would make it, but thankfully it did. 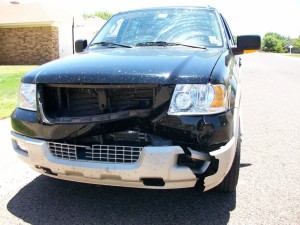 Every time I close my eyes, all I see is deer legs popping up over my car. I’m so sad for that poor little deer!

By the way, it was a moonlit night and Jim would brake everytime he saw deer on the side of the road so we would be aware; I never saw so many deer in my life . Patti said it looked like a zoo. Deer were everywhere and rabbits hopping around as well as armadillo’s. I even saw a porcupine! I got so tickled, Rodrick said “What is this, Noah’s Ark?”

I don’t think we will be traveling those roads after dark anymore. 🙂 Poor little deer. I hope he didn’t have a family that was waiting for him on the other side of the road. 🙁 I hope the little thing didn’t suffer too long.

I was told that I was very fortunate that it wasn’t any worse. If I would have panicked and over corrected, it could have been bad. I know the Lord was with me because I couldn’t have done that by myself at all!