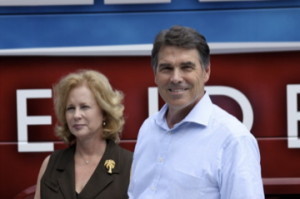 Texas is my home, so naturally, I know a lot about Rick Perry.  I home-schooled my children and I first became aware of who he really was when he would make speeches defending parents rights to educate their own children.  I liked what he had to say.  He also was strong in his stand on protecting innocent babies from being terminated in the womb.  That was another plus for me.  He stands strong on the gun laws, the human trafficking issue, border protection, balancing the budget.  He is a man of strong character and integrity.  He isn’t ashamed to speak of his Savior, Jesus Christ.  He loves his family.  Can you get any better than Rick Perry?  Okay, so he had some flubs during a couple of the debates, he is also human.  He has been very strong in the last few debates.

Rick Santorum:  I like him.  I won’t have any problem casting my vote for him if he is the candidate.  I hope he can run a country and take care of his family…he still has children at home.

Mitt Romney:  I don’t know, there is just something about him.  He has a nice family. 🙂  I will vote for him if he is the Republican candidate in November.

Newt:  I used to be a big fan of Newt.  But, I lost it when he had the wife issues…..can’t help it.   I like the way he puts the media in their place. Yes, I will vote for him if he is the Republican candidate still standing in November.

Huntsman:  Not sure about him.  I don’t have a good feeling when I listen to him for some reason.  Nice family though.  Yes, I will even vote for him if he is the one.

Ron Paul:  Where did he come from?  Texas?  How did that happen?

Michelle:  I really liked her.  I honestly don’t think I’m ready for a female president.  I don’t know why, I just can’t see it.  But, if I had to vote for her, I would have.  She has strong values and she is very knowledgeable.  I admire her family life.

Herman Cain: Well, I just don’t know.  Glad I don’t have to figure that one out.

Well, there you go.  As interesting as that is, it’s said and done.

I’m basically tired of the news already telling me who the best candidate is and who will make it etc. etc.  I’m a FOX News fan, and I’m about to give them up for a while.  If the first primary was Texas, guess who the front runner would be?  The news media would be degrading all the other candidates.  It’s getting old already and we have 10 months to go.